END_OF_DOCUMENT_TOKEN_TO_BE_REPLACED

Anne is currently finishing a Masters in Communications in Paris. Music is her airplane. Curious and open, she likes to discover new sounds and artists in concerts, on the radio, picking randomly CDs at the record store. She has a keen interest in original electro-psychedelic rock variations and experimental sounds. Anne joined the team in July of this year as a musical bee—flying from gigs to gigs. Combining her love for music and writing, she posts critics of what’s happening on the Paris music scene. Passionate but critical, she has a sharp sense of what’s new and is always looking for fresh and innovative sounds to be highlighted. Raised in a multicultural environment, Anne’s tastes have been influenced by many genres such as French Rock, ethnic jazzy pop, Indian techno music, British pop, US 1980s funk-rock, but also grunge. Ultimately her goal is to work as a music promoter and bring talent on the forefront.

CNN staff. (2008). “Legendary magazine covers get their own spread.” CNN. Retrieved on April 27, 2008. http://edition.cnn.com/2008/SHOWBIZ/books/04/25/esquire.coverart.ap/index.html CNN publishes a eulogy of George Lois as his work for the Esquire magazine is going to be exhibited at New York’s Museum of Modern Art. Reviewing some of the magazine covers, the journalist highlights what made the designer’s shots iconic. In this respect, two main arguments come up. First, the journalist lays an emphasis on the power of the images. Describing Muhammad Ali posing as Saint Sebastian, he shows to what degree it stroke people’s memory. In fact, in Lois’ point of view, the photograph has to make a powerful statement to push the viewer to look at the article inside. Not only did he succeed in doing that but he also stroke people’s memory to such an extent that they still remember where they first saw this cover at the time. His photographs gave polemical statements on political, cultural but also social issues and triggered heavy debate in the society. They became iconic through their simplicity of evocation and their ability to instill a tinge of provocation about contemporary issues. The Vietnam covers are telltale when it comes to affecting the…

END_OF_DOCUMENT_TOKEN_TO_BE_REPLACED 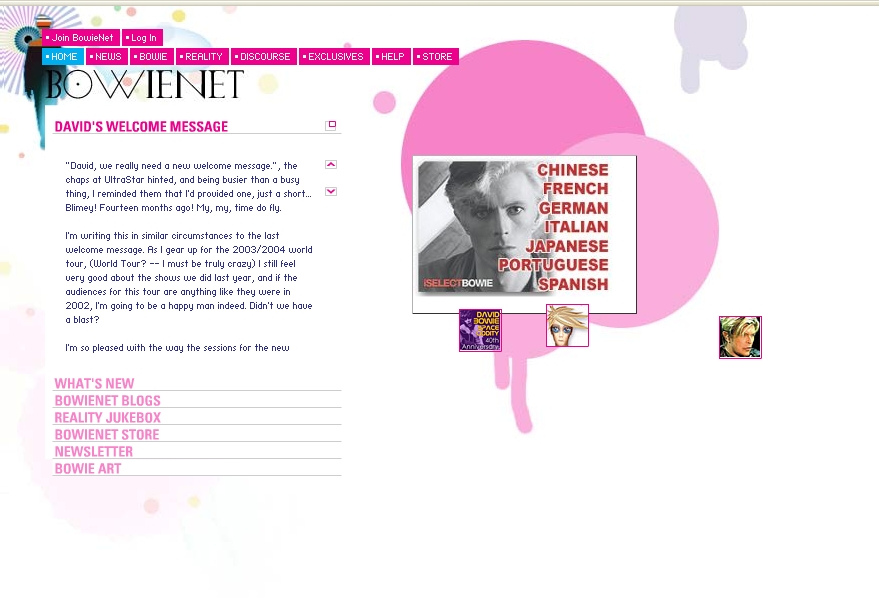 Nash, K. (1999). “Ch-ch-ch-ch-changes: Interview with David Bowie.” ComputerWorld. Retrieved August 1, 2001: http://www.computerworld.com/cwi/story/0,1199,NAV47-STO39387,00.html The is a screen shot of David Bowie’s Home Page as it appeared on June 24th, 2010. In this interview, David Bowie, a musician and philosopher, shares his view of the Internet and how it may evolve and influence society but also the music industry over time. His depiction of his website serves as a starting point to his argument. The individualized portal, BowieNet – where he chats with fans on daily basis and keeps a personal journal – is telltale when it comes to his approach to the net. As a matter of fact, Internet is a huge decentralized village in Bowie’s point of view. The portal – by enabling the creation of online personas and by providing links to all the fan blogs on him – offers the opportunity to foster a village-like facet of internet with a free circulation of information and a sense of community built around him and his music. In fact, such interaction enables, according to Bowie, a new way of knowing people. He confesses that he likes to take on other names to simply observe what happens in the…