END_OF_DOCUMENT_TOKEN_TO_BE_REPLACED

In Victorian times (1937 to 1901), the female protagonists used to be about fifteen or sixteen — girls of marriageable age! For these children, coming-of-age meant going directly from playing with dolls and right into a marriage bed. Boys were perhaps a bit older, 17, their swords changed from wood to metal over the telling of their coming-of-age stories. Think of The Vicomte De Bragelonne or The Count of Monte Cristo, written in 1847 and 1844, respectively. The young count and Edmond were just teenagers when their stories got started. Edmond got to live to be an old man. Raoul didn’t live long, dying a tragic literary death in the full bloom of his youth. But if these novels were written in modern times, we would have to make these characters much older. It just wouldn’t do to make a father want to marry away his daughter that young. And we don’t expect such young kids to go off fighting (although we still recruit young men to sign up for military service at 17, before their prefrontal cortex fully develops, making them easier to manipulate into killing other human beings). Obviously, similar points can be made of Romeo and Juliet — what were those kids doing sneaking around after bedtime? Both were too young and inexperienced to call for a doctor when a friend seemed to be having a medical emergency! As parents, we should teach our children better.

So do the modern coming-of-age stories need to be skewed older? Do millennials come of age in their mid-twenties? Or even later? Is that why we now have a new adult audience and not just a young adult, middle grade, and adult? Do we need to start creating societal changes to accommodate our children remaining children for a decade or so longer? Perhaps the whole coming of age just takes more time now. Back 100 years ago, people became adults in just a few years. Now it takes decades. 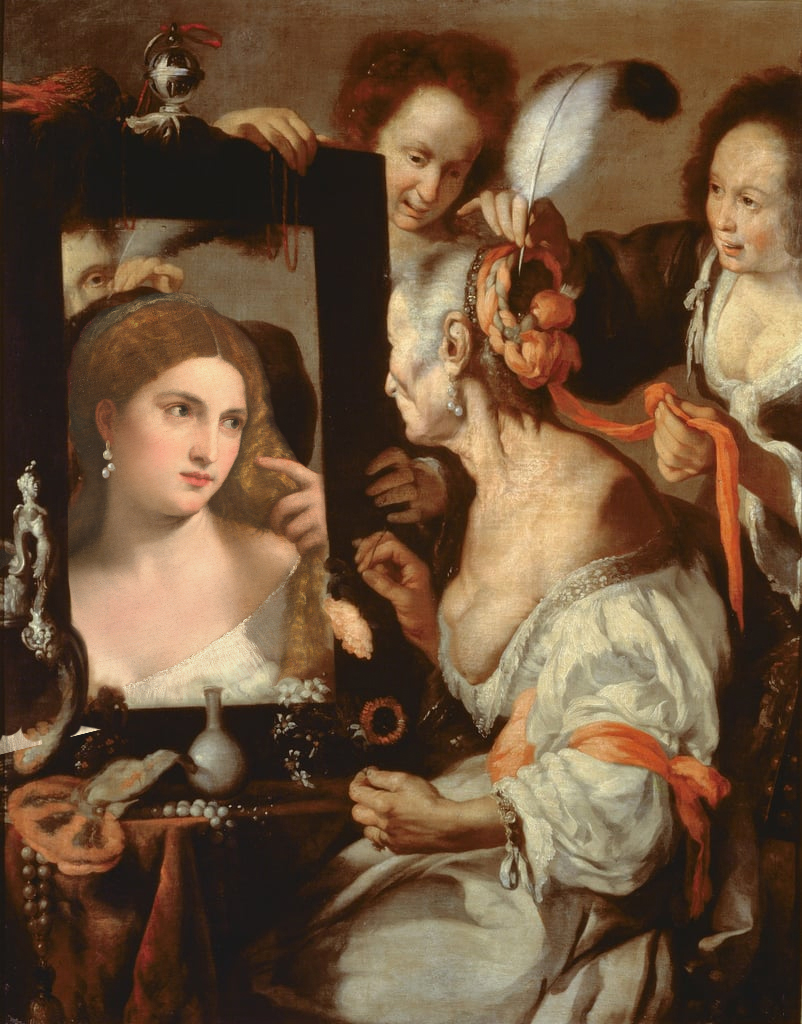 Credit: this is a collage of two paintings: “Old Coquette” by Bernardo Strozzi and “Woman with a Mirror” by Tiziano Vecellio.

Some people, myself included, have a certain internal age that stays constant throughout our whole adult lives. When my husband’s grandmother, in her late 90s at the time, confided in me that she felt just 25 and was surprised by the old lady staring at her in the bathroom mirror, I wasn’t surprised. I feel about 27 or even a bit younger on the inside. It was probably the age at which I felt like a full adult. Others I know have an internal age that has nothing to do with what’s on their driving license. But not all. I wonder if this internal clock stopped at a different age in different ages? Did people in medieval times, who didn’t live much past 25, feel like fifteen all their adult lives? Or do cultures where maturation happens quicker or takes longer by societal norms have a slightly different stop for their internal clocks? Would the culturally-determined time of maturation (their internal clock stoppage) change people’s reading preferences? If people feel 25 on the inside, wouldn’t it makes sense that they identify with 25-year-old protagonists and want to consume stories about that age group?

My protagonists tend to be young on average. In Twin Time, I follow the girls, Alex and Sasha, from the time of their birth to their college years. Pigeon is only a boy and the whole story spends just a few months. Suddenly, Paris also takes place over one Christmas and Jo is only 16. And while these protagonists fall squarely in the coming-of-age sweet spot by Wikipedia’s definition, I believe my stories are something else. Some other genre — an early journey into adulthood, first steps, so to speak. Perhaps there is a spectrum of developing self-awareness — not much for low teens, slow-burn through the early twenties, and full awakening in the late twenties/early thirties. If considered that way, it gives us authors more time to explore the nuances of growing up, as our protagonists hit their lifes’ milestones at a slower rate.

I always try to join some book promotion as part of my newsletters. This time, I came across Geek Collective — a collection of ebooks where the protagonists save the day through their intellectual prowess rather than physical ability. The Geek Collective ebook giveaway runs a full month from June 16th to July 16th. I thought my Mirror Shards would fit right in (so would every other book I have ever written, but one has to pick and choose). As a disabled kid, Hig is trying to overcome his circumstances through a brave heart and a quick mind. If you haven’t read it yet, I hope you would give it a chance. The other books look great too! Please check them out. And unsurprisingly, most seem to be aiming for the coming-of-age reader demographics.

If you forget about who you see in the mirror, how old do you feel you are?