END_OF_DOCUMENT_TOKEN_TO_BE_REPLACED

The wind howled northward, as normal for this time of the year. The angle of planetary spin resulted in a decreased amount of sunlight in the Northern Hemisphere during this portion of the orbit cycle. The atmosphere precipitated onto the surface as ammonia and water snow, lowering the air pressure, creating a stable gale south to north. The sands shifted and shifted again. A tip of a stone structure, worried by years of drifting particles, poked slightly above the surrounding dunes.

“There!” The man called to his companion over the radio built into his environment suit and pointed at the tip of a hexagon. The atmosphere of this planet wasn’t breathable…yet.

“It could be just another freak of nature,” the woman, similarly dressed, said. “There are stones all over this plateau. This one is perhaps a bit more regular…”

“I know. I know,” he interrupted yet another pointless discussion on how his obsession with finding the remains of some long-lost civilization was just a corny fantasy, all evidence just a fluke of the abrasive nature of the endless shifting sands. He lifted his hand to his chest, where underneath several layers of protective clothing hang a small intricately carved piece of sandstone on a simple plastic cord. Hugh found that “artifact” a decade ago when he was part of the very first expedition to terraform this dusty rock. It was lying in front of his habitat, by the hatch. He was certain it wasn’t there the night before, and then like some spirit, it just materialized where he was sure to find it.

The small, intricately carved rock caused a sensation back home, but when no other evidence emerged, the eye of the crowd moved on to other things, the idea of the artifact dismissed and forgotten. Hugh carried the thing around his neck since then. And Enry-o made fun of him every time he looked askance at some pattern on the cliff or a tip of a rock formation that seemed too regular or too engineered to be carved by nature. In all the years since his first find, Hugh hadn’t discovered another piece as wonderful as the first. Just a bunch of almosts…

He hit the exposed hexagon with his boot, as much in frustration as in the desire to uncover a few more centimeters. The rock didn’t move or crumble, and Hugh’s foot experienced the full force of his own kick. 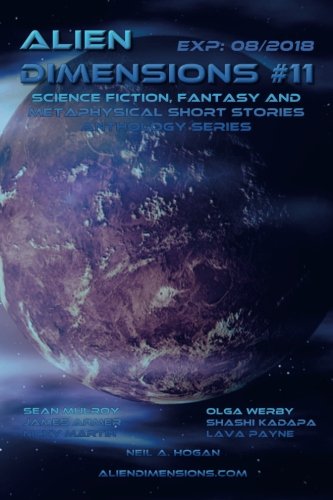 A short version of “Shifting Sands” was first published in the eleventh issue of Alien Dimensions, Science Fiction and Fantasy Magazine of Short Stories. Alien Dimensions reserve the right of first publication for twelve months and then expire the issue, allowing the authors to continue sharing their work.