END_OF_DOCUMENT_TOKEN_TO_BE_REPLACED

This month, I’ve jumped in head first into dark and cold waters of book marketing. I’ve learned a lot that was new to me but was probably obvious to any salesperson — other people (unlike me) like to read very specific genres of books. For example, if you are into a billionaire werewolf romances, you are NOT into werebear billionaire romances. Yes, people like what they like and there are many authors who are happy to write for very niche audiences. But I read lots of different things, fiction AND non-fiction. I read WWII spy novels AND science fiction. I like action adventure AND historical fantasy. My taste in books is as broad as the stories I like to write. But apparently, that’s not good for marketing. My books are all so different that I’ve been having a hard time zeroing in on a unifying theme for my stories. And then it hit me — I write Jewish Science Fiction…or Jew-ish Sci-Fi.

So what’s Jew-ish Sci-Fi? It’s a hero journey to save the world, where the hero belongs to a tight group of outsiders forced to make their way in the world by their talents and smarts and who are continuously being discriminated against by the society at large, but who take a long view on happiness even as they complain about the hardships along the way. This applies to ALL my books. This is what my stories ALL have in common.

By my definition, Jew-ish Sci-Fi has the following characteristics:

You might think that’s not a thing, but consider that the most famous science fiction and fantasy writers you know are/were Jewish and they all have a LOT in common:

I can go on and on. Jews are well represented in literature. Now I’m not comparing myself these great authors, I’m just saying I write in their genre — Jew-ish Sci-Fi.

So I don’t write werebear romance stories. I write about unlikely heroes who have to go way outside their comfort zone to save not only their families and immediate communities but the whole world…universe! All my books are at some level about unrecognized abilities, about persevering through fear, about love above all. 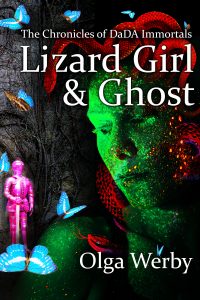 For the next day, I’ve made one of my stories, Lizard Girl & Ghost, free as an e-book on Amazon. It’s a story of a dying child, a parent desperately trying to save his little girl, and a whole other reality of cyberworld, where avatars of the dead share space with those of the living. Get it today. It’s a very Jew-ish story…

And I would also like to share a link to an e-book promotion — a bunch us indie authors get together and put our books together to give our fans and readers a little something extra. These books are all in the Self-Published Fantasy Blog-Off 5 — a little friendly competition for the indie writers. Most of these are free on Kindle Unlimited until August 31st.

And one more thing… Another one of my short stories just became available for a quick read: Time Travel Suicide Therapy. Enjoy! Thank you for reading, and if you like a story, remember to leave a review.

For a bit of reference, just in case you didn’t get enough of Jewishness yet, check out this article in Encyclopidia.com on Jewish Science Fiction and its historical roots.