END_OF_DOCUMENT_TOKEN_TO_BE_REPLACED

Here is a couple of examples where gamification of user activity was causing direct harm. Understanding what drove undesirable behavior allowed designers to remove those aspects from interaction intentionally. And an example of using gaming strategy to increase sales.

British online support site for young eating disorder sufferers provides access 24/7. It is absolutely vital to help children during times when they feel vulnerable, especially once they’ve been released from a program. But old habits are hard to break. It’s easy to devolve into a numbers games on a public BBS — “I’ve lost/gained 5 pounds in the last 2/4 days” is an absolute trigger message for a person recovering from anorexia. Anorexia is a numbers game: How long can I go without food? How little can I eat per day? How many pounds can I lose? How fast? There’s an unhealthy competition with oneself…

These old patterns quickly emerge online when competition for most or least among members can spark unhealthy behavior and cause a relapse. Understanding that numbers drive competition and gamification of behavior, the administrators of the site insist of one unbreakable rule — no numbers! A patient can talk about feeling low, they can worry about losing or gaining weight, but they can’t compare their stats with those of other patients. A little basic insight into gaming behavior resulted in a better approach to managing an eating disorder community. 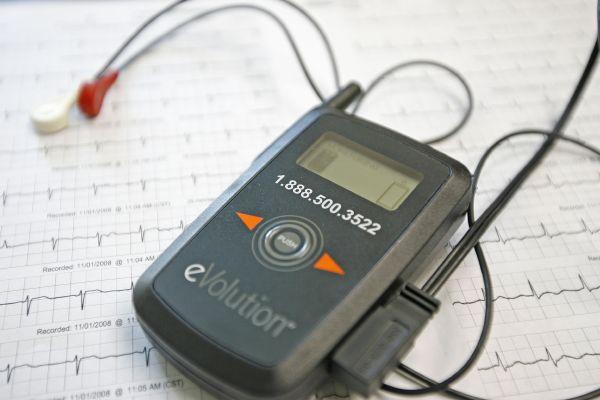 Portable heart monitors have been evolving over the last decade. From as many as 8 different monitoring wires, we now can get those with just two. The unit itself is pretty light-weight. And it has a modem built-in — no need to send the data manually.

There has been some interaction and interface design improvements as well. There is no on/off switch! Once the batteries are in, the device is on. A patient who is suffering from heart problems might not be able to figure out how to turn and off the device and this would lead to errors and vital data loss.

There is also just one button — feel sick? Press! That’s it. That’s the extend of the interaction. The device records several minutes of data and is able to retrieve a stream from a minute before the patient pressed the distress button. The data is sent automatically. If the devise notices that the heart is beating irregularly, it sends the data to the doctor on its own initiative.

There is a toll-free phone number printed right on the monitor — have questions? There’s 24 hours support.

So where’s the gamification, you might ask? It’s in the display of data! There’s a small display window at the top. It shows how much battery life is left. And it indicates that the device is collecting data: “monitoring…”

Early on, this same window also showed the continuous image of the person’s echogram. You can literary just watch your heart beat! And people did — some just stared at their hearts the whole time, walking into walls, crossing the street unsafely… The little window of data turned the device into a game: What activity will result in an irregular heart beat? How can I make my heart race? What can I do to slow it down? Can I use the data to win an argument? “See what you are doing to me?”

And so, the latest models of heart monitors no longer display the heart beat data. Gamification was extracted from the device due to unsafe use.

Interestingly, there is a new wave of self-monitoring spurred by low cost and ease of use. Quantified Self movement is all about collecting personal health data and sharing that data in a social community. There are dozens of heart monitor apps that are built into iPhones and Android-based devices. The lessons learned from the early portable heart monitors have yet to be learned by this new community. But I guess the people who monitor their hearts with their iPhones are not necessarily the same population as those that get a prescription from their cardiologists…

Fast food restaurants have been gamifying food consumption for decades! So it is not a surprise to find a new trend in using this sociobiological technique to increase food sales. 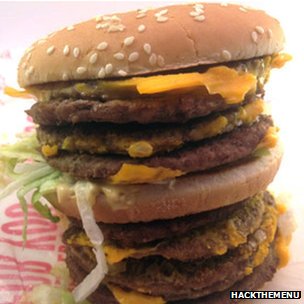 One of the advantages of frequenting the same restaurant or bar is that people get to know you — you become a regular. Being a regular customer has certain advantages. For example, I’m a regular customer at a local fish monger. When I order my fish there, I get preferred treatment: “We were saving this for a sushi bar, but you can have the tuna!” I get the best fish. And in return, I return again and again. I never buy fish from anyone else. I’m loyal and will remain so for as long as I get the special treatment of a regular customer. I’ve been gamified!

But how would a fast food restaurant gamify its customers? The problem with fast food restaurants is a high turn over of employees — people just don’t recognize you, there’s no “corporate memory” among McDonalds servers. So what else can be done? The answer comes from standard sociobiological tricks — use secret codes. And so we are experiencing the rise of the secret menu items. Meat Mountain, anyone? Just go to Arvy’s. Monster Mac? But of course — you must be a regular to know to ask for a secret, not-on-the-menu item at McDonalds. Why not ask for Cheesarito or Superman Barrito at Taco Bell? Let them know who you are!

Sociobiology is a scientific study of human (and animal) behavior. This is the field that has been advancing in leaps and bounds in the last few decades. This is also the field that gave us Gamification — a theory of how to add gaming elements into the design of an activity to boost engagement. But gamification is just one of many interesting tools that are coming out of sociobiology. If you are a designer, you might want to look into others.