END_OF_DOCUMENT_TOKEN_TO_BE_REPLACED

Google Traffic Map on an iPhone (or any other mobile device) is a great product… unless you are colorblind. Then, it’s a nightmare! 5% to 20% of the population has some kind of color processing disorder. Here is a simple test if you are one of those.

Which of the following look the same to you? 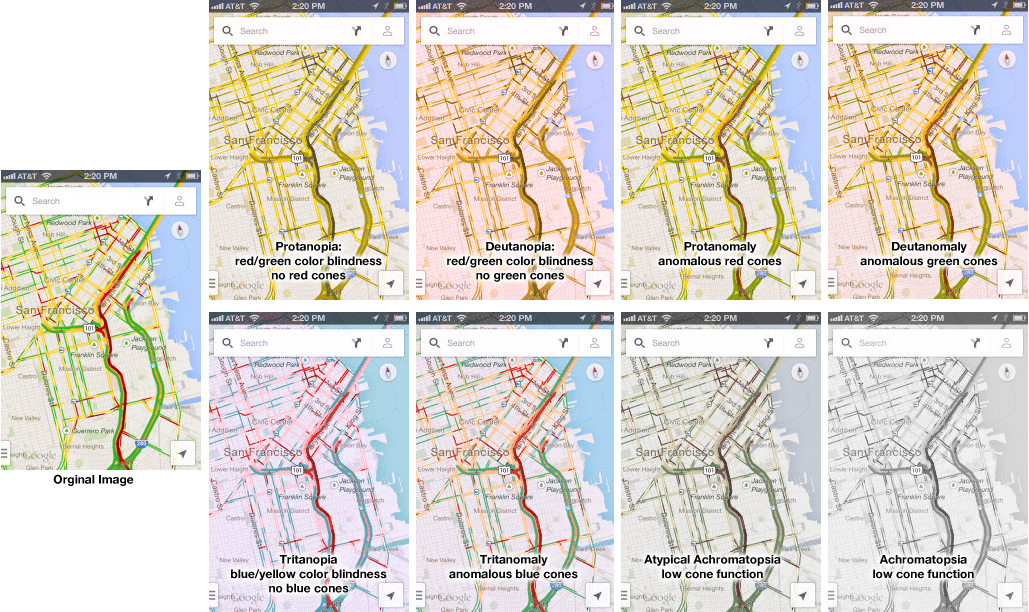 As designers, we have to be aware of our audiences’ limitations and strength. And visual processing and comprehension is no exception.

In the past, I’ve written about colorblindness: . But unfortunately, the site that helped identify problems with design doesn’t seem to work. Here’s a new sit e for your reference: Colorblind Web Page Filter

If you are interested in reading more about how different types of color blindness affect people’s lives, please read Oliver Sacks’ book:

In the book “The Island of the Colorblind,” Dr. Oliver Sacks describes his adventures through a series of islands in Micronesia, which have an unusually high percentage of congenital achromatopsia (sever colorblindness) among the population. One of his traveling companions was a Norwegian scientist, Knut Nordby, an achromatope himself. Dr. Nordby described how his rather rare condition affected his early education. In addition to complete color blindness, congenital achromatopsia causes extreme sensitivity to bright light and poor visual acuity. Dr. Nordby’s condition was diagnosed early, and since his vision was thought too poor to learn to read, he was sent to the school for the blind. But he hated Braille and used his sight to decipher the shadows on the page made by the raised bumps. He “cheated” at Braille and was caught. His teachers punished him for using his eyes to read and made him wear a blindfold in class. Dr. Nordby ran away from that school and eventually taught himself to read printed words and became a successful psychologist.

For more from Amazon, click on the book cover.