END_OF_DOCUMENT_TOKEN_TO_BE_REPLACED

Of Doctors, Babies, Kings, and Zombies

Before starting my journey as science fiction writer, I got a few degrees under my belt — astrophysics, mathematics, cognitive science, education, etc. It took a few decades (I’ve gotten married and had a family in there somewhere), but I got my doctorate and have used and still use it to help people think through complicated problems, mostly in product design. How is this relevant to writing, you might ask? Well, in addition to witnessing and surviving some amazing situations — always a good experience for a writer — I’ve acquired a few tools on how to think about situations and people. I would like to share one such tool with you: Us versus Them, a cognitive perspective.

What people (and other animals) are very good at is dividing themselves into Us’es and Them’s. It’s a useful tool when we live in a divided world — how else do we keep clear of our allegiances to countries, sports teams, and political parties? But these divisions have neurological and psychological underpinnings. Consider a four square graph that charts competency versus likability (emotional warmth and approachability): 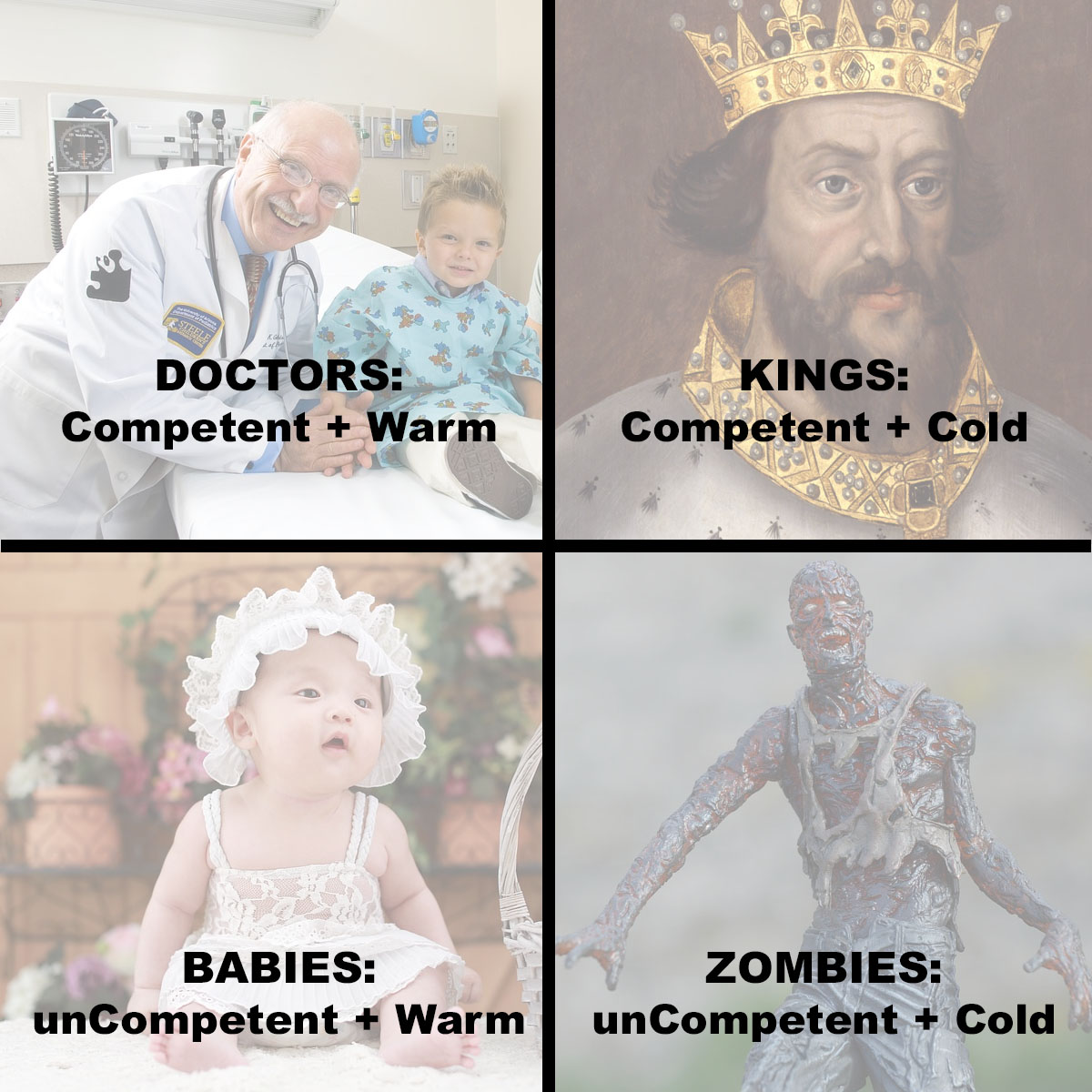 We perceive (our) doctors as warm, personable, and able. We see babies and elders (and people with disabilities) as warm and not very capable. We see authority figures as capable but not very approachable or emotionally warm. We see petty criminals and terrorists as emotionally cold and not very able. Where do we see ourselves? Well, we are competent AND warm, of course! All the people in our group of friends are emotionally warm and competent — that’s why we are friends! That’s why we are part of Us! I’m not saying there isn’t sociopath or two among your friends, but basically, we like to hang out with good, warm, capable people.

So what kind of people occupy the other three boxes? Well, it’s common to think of criminals in jails as the emotionally damaged and stupid — otherwise, they wouldn’t have been caught! These people not only unlikable, but they light up parts of our brains that deal with disgust (as in I found a giant roach in my hamburger!). Unfortunately, homeless people tend to evoke the same response, at least at first. Most are loath to touch them. Same was true for lepers and the insane locked away in the Gothic and Victorian asylums. And of course, this is true of the zombie thrillers of today.

The mastermind criminals are grouped in the top right corner — they are cold and bloodthirsty, but very clever: unwarm and competent. These are the main James Bond villains. But these are also some of our very top politicians as well as the “evil scientists” types. Unlike the unwarm-uncompetents, we tend to admire this group, but don’t personally like them much.

Baby kittens, and little chimps, and helpless-adorables are firmly in the lower left quadrant. For awhile, damsels in distress were there as well. But modern day literature pulled those women out of their helpless state and into the top left side where they belong.

When writing an apocalyptic or dystopian story, it’s important to understand where each character belongs and how each character arch moves. We want our heroes to start warm and incapable and through trials become more and more capable until they save the day — the typical hero’s journey. We want our villains to lose power, to become cold and incapable, to evoke disgusts. We want our fairy godmothers to be firmly in the top left. And that’s the trick to a good dystopian.

My book, “Pigeon”, focuses on a homeless orphan (lower right quadrant) who learns that he is really a super hero (upper right quadrant). My villain is a cold bastard who is super smart. So there you go!