END_OF_DOCUMENT_TOKEN_TO_BE_REPLACED

In the Galaxy Far Far Away…

What if sentient being evolved on a planet with permanent cloud cover? What if these being never saw stars? Would they still be able to discover the laws of nature?

These kinds of hypothetical thinking questions — the Gedankan Experiments, as Einstein put it — are very useful in science. I’ll try to use them here for analyzing product design and communication.

So what senses do we need to communicate? And what body appendages are necessary to produce this communication? Note that it helps keep track of these separately.

When I was little, I “designed” a language based on smell: each smell was assigned a character in an alphabet and, strung together in sequence, my smelly letters transcribed into words — the Aroma-bet. There were several problems with this:

But other then that, I loved the idea.

I haven’t thought back on my smelly language in years. But it came to mind again when I was trying to work out the boundaries of communication problem: what are all the possible ways we can communicate with our senses given the environmental and social limitations?

We use sound to communicate — we’ve developed sound-based language, where words can be composed of phonemes which are stung together to make thousands of possible combinations of sounds to represent concrete and abstract ideas. To do so, we need two things: ability to generate sounds (just the right kinds of sounds) and the ability to receive and comprehend sounds.

There are many different ways sounds can be made. Humans use only a subset of what’s possible. We tend to stick with what we can produce orally: phonemes, clicks, whistles, pops, and the like. And modern languages limit this range to mostly phonemes — ancient click and whistle languages are mostly gone now.

But other alien civilizations can use sound to communicate in different ways. Multiple body parts can be involved: clapping, stomping, whistling (ala whales and dolphins). And the acoustic range could be wider or narrower or simply different. Different environments allow for better transmission of certain frequencies.

And of course to use sound for communication, there needs to be a receiving organ. Humans need ears to register sound and audio-processing centers of the brain in order to comprehend the information streaming in this format. Some individuals with audio-processing disorders have problems processing sounds fast enough to understand them, unable to tell the difference between “b” and “d” — turning “dad” into “bad”.

We also have visual communication — we use visual symbols as phonemes. We can string together an infinite combination of letters and words to express ideas.

But an alphabet is not the only method of visual communication. We can use images, as in photos, graphs, movies, cartoons, illustrations, symbols, logos, etc.

We also use visual information to gather data on emotions — during face-to-face conversations, the emotions expressed on the face and those projected by body motions and stands add an enormous amount of additional context to the spoken words. This is why telephone conversations and radio plays require more concentration from the listeners — there’s only the audio stream of information, which is very limiting.

Visual communication can also be serial without being written down. Sign language is an example of using gestures to communicate visually. Semaphore is another system for communication at a distance by means of visual signals with hand-held flags, rods, paddles, or other devices. 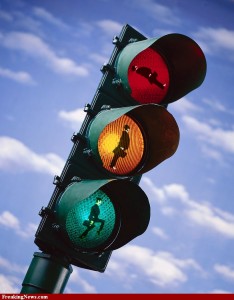 And of course we have light signals that are used for directing vehicles: red for stop, green for go. This is also an example of visual communication.

There are many possibilities for visual communication.

Haptic are all other human-possible forms of information transmission: body movements (kinetic), facial expressions, hand signals, pheromones, smell, surface changes (touch). Aside for pheromones and smell, most of these require that the receiver (not the sender) of information is capable of getting visual signals.

But there’s one more sense that doesn’t require sight or hearing — touch! The most common example of touch communication is brail — a system of raised bumps on the surface that allows a person to “read” the message like one would read an alphabet. Only the reader of brail can use finger tips to gather more data at once than a visual reader of the alphabet by moving both hands from sides to the center. The reading of brail is still serial in nature, but more two dimensional than sight reading. 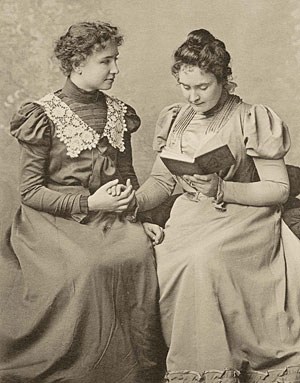 There’s also a form of sign language that is communicated through touch — Tactile Signing — think of the story of Anne Sullivan and Helen Keller. 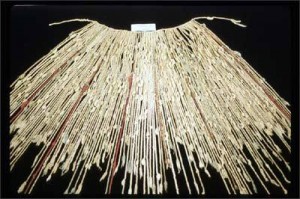 Touch is a very rich medium of communication. Inca Quipu/Khipu culture used a complicated set of knots as a system to record information — the “reader” felt-up a string with knots and extracted data from the recorded message. Clearly, there are many interesting ways that touch can be used to conway information.

Back to Aliens & Gedankan Experiments 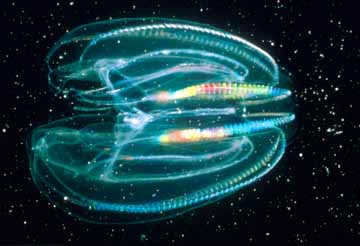 The range of possibilities for sensory-based communication is limited by the physical laws — telepathy is great in sci-fi novels, but is not possible in real life (although, direct brain stimulation as a way of transmitting data is possible). And the options of which senses are most useful for communication are depended on the environmental conditions under which communication takes place. Alien life living deep in the ocean would have issues with visual communication without internal light sources — thus we have wonderful bioluminescence.

These Gedankan Experiments are not simple flights of fancy. Think about possibilities, freed from excepted norms, can help product designers find novels ways to communicate. Gestural interface has its roots in sign language. What can smell and taste do for us and our devices? How can we use easily generated and consistently duplicated variations to conway a message? And would this message expand the range of possibilities for device uses?

2 comments for “Thinking about the Science of Communication and Interaction”