END_OF_DOCUMENT_TOKEN_TO_BE_REPLACED

Sometimes, it’s in the eye of the beholder. Consider the images below: 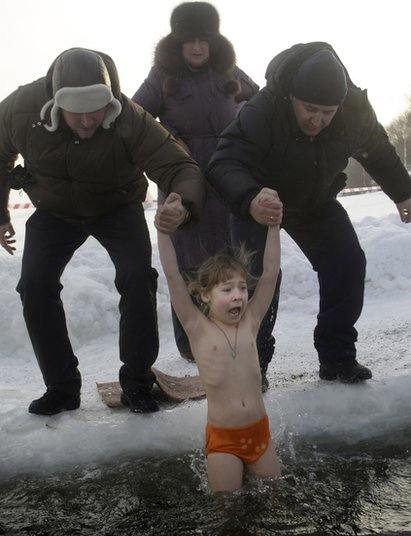 The winter-coated men dunking the girl into the ice-cold water think they are doing good by this child! This is the right of Epiphany–a religious act meant to help the girl. How do we evaluate the social value of such act from the comfort and warmth of our computer lit rooms? 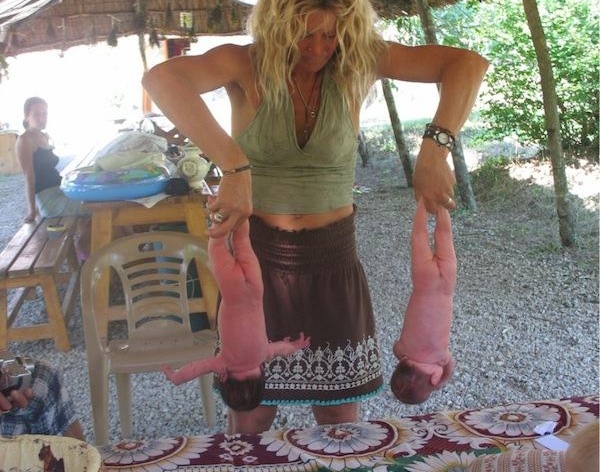 How do you feel about this photo? If you’re not sure yet, follow this link: http://video.mail.ru/mail/mimozachina/2688/2690.html

My personal feeling is that if zoo keepers saw this kind of behavior in the primate house, the baby ape would have been taken away due to its mother’s lack of parenting skills. But then again, I’m just imposing my cultural views and norms on someone else…or am I?

There has been a gush of news, posts, opinion pieces, videos, and discussions about Amy Chua, the Yale Law professor professor who wrote the book Battle Hymn of the Tiger Mother

, and her parenting style: she’s a Mother Tiger, apparently.

Is Amy Chua a monster? Does she abuse her children? Whatever the answer, people here certainly want to talk about it! And I’m sure that all this publicity is doing the sales of her book a huge boost.

Others, not wanting to be outdone, are capitalizing on this wave of strong emotions and are coming out, calling themselves “Dolphin Mothers” as a way of stating their diametrically opposing views to those of Dr. Chua (check out this CNN article).

Every culture has a mental model of parenting–an ideal to which we aspire. Unfortunately, we think of culture as this giant collection of people with similar tastes, rituals, and values. But culture is not so monolithic. Here in US, we have many cultures, some say it’s out strength.

We live in San Francisco. Here, it’s even more finely fragmented population. It’s a patchwork of people from all over the world, speaking hundreds of different languages, all crammed together in geographically tight space. Ask next door neighbors, and they won’t agree on what’s the best method of raising kids. Ask members of the same family, and they might have a fight about what’s best for their children. Each generation, each immigrant family, each household, all recreate their own micro-culture. And when a topic as divisive as what’s in the best interest of a child enters the discourse, it creates an explosive reaction. Because we all believe that we are know best when it comes to our children!

Cultural differences lead to cognitive blindness–we simply can’t understand how others, given the same data and the same environmental conditions, can be making such different choices. How could they be so wrong?!

What’s important is that Tiger Mothers, Dolphin Mothers, even Grizzly Mothers and Orthodox Russian parents ALL believe that what they are doing is in the BEST interest of their children. They are acting culturally appropriate. But for some of us, it might be shocking!

Our reaction to differences in child-rearing is not the only strong emotional response to cultural differences. Sex and family values are very divisive as well and lead to similar bouts of cognitive blindness.

These are young men participating in the Gerewol Beauty contest in Sub-Saharan Africa. Beautiful? Sexy? It’s in the eye of the beholder!

The black lipstick is meant to show off the beautiful white teeth. The red face paint with black and white patterns points out the perfect symmetry (and hides small blemishes). The long white stripe down the nose highlights the length of the organ (because we all know that men with long noses, have long…–in this culture, Cyrano would be the first pick and Pinokio would be encouraged to lie regularly).

Women judge the Gerewol Beauty contest and the judges, even married ones, regularly leave with the winners. This culture is monogamous, but the cultural norms for picking one’s sexual partner varies from ours.

Immorality or cultural differences? Who should be the judge?